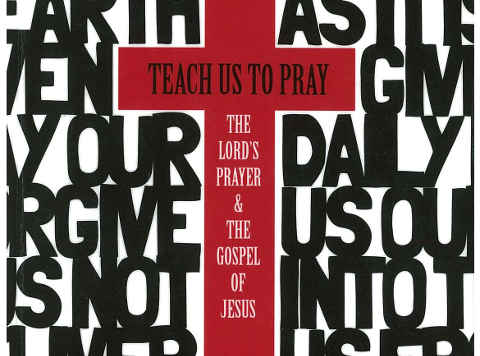 Published: Teach Us to Pray, Presbyterian Church of Australia, 2013.

The Lord’s Prayer is a finely cut diamond. It has many dimensions. This is why Matthew and Luke both record the Prayer, but both treat it differently. What do the two contexts tell us about the different dimensions of this precious jewel?

‘New’ Law is not ‘replacement’ Law. Some think Jesus contradicts the Law of Moses. Rather, He opposes the abuse of that Law. For example, some used Moses to advocate easy divorce. However, Moses was actually trying to curb the practice (Deut. 24:1-4), and so Jesus refuses to endorse this twisting of God’s Word. He does not want His new community to replicate the fly-straining piety of the Pharisees.

Jesus overtly says He is not rejecting Moses. ‘I did not come to destroy’ the Law and Prophets. In fact, He says He came ‘to fulfil’ the Law (5:17). He explains the true meaning of the Law, and demonstrates perfect obedience in His own life. He establishes the new covenant by His own teaching and life – but on the historical foundation of the preceding covenant.

The continuity with the past is seen in the topics the Sermon addresses. Jesus’ new Law touches on murder, adultery, divorce, oath-taking, vengeance, loving one’s neighbour, charity, and prayer. These were all live issues for Jesus’ contemporaries, who were trying to follow the Old Testament Law. It might surprise us, but the Prayer itself fits both the Old and New Covenant context.

Still, the people were rightly ‘astonished’ at this new teaching (7:28). It was not the content that shocked them. Rather, ‘He taught them as one having authority’. The scribes cited other scribes as their authority, and Moses had to add, ‘Thus says the Lord’, to his pronouncements. Jesus spoke on His own authority. ‘I say to you’. ‘Pray like this’. It is His Law. He does not just hand on instruction about prayer. He defines how God’s people should pray.

Who could this man be, who regulates the worship and morality of God’s people? This is ‘new’ Law from the ‘new’ Lord (neither of which is new at all).

Jesus includes prayer, because prayer is how we fulfil the old Law. What did Moses say? ‘Have no other gods before Me’ (Exod. 20:3). ‘Love the Lord your God’ (Deut. 6:5). In prayer, we worship and love God.

Not everyone in Jesus’ day seemed to get this. Jesus encountered ‘hypocrites’. They claimed to worship and love God, as Moses commanded, but they abused prayer.

How did they abuse prayer? Their motives were wrong. Their fault was not that they prayed in public or used pre-written prayers (Jesus did both). Rather, they twisted this means of grace into a means of self-aggrandisement. They perfected the art of the show-off prayer. Perhaps they prayed like the Pharisee in Luke 18:11-12, the famous prayer of self-congratulation. This was not love of God; this was love of self. They were not worshipping God; they were self pray-ers.

Jesus intends the Lord’s Prayer, then, to bring us back to true obedience – to the true worship and love of God.

Before Jesus delivers the Lord’s Prayer, he speaks of the ‘reward’ of prayer. What is this reward?

This is also the reward of prayer. The reward is divine. It is God Himself.

Moreover, this is a future reward. Jesus says, ‘Our Father who sees in secret will reward you openly’ (6:4, 6, 18). It refers to the next age, in which ‘nothing is hidden’ (Mk 4:22; Lk. 8:17). The reward of prayer is primarily not found in this age, but comes when the kingdom comes, and when we see God face to face.

Note that the ‘reward’ is the intrinsic result of prayer. It is not a payment for services rendered. It is ‘blessing’ (‘Blessed are”¦’, Jesus says). We do not secure the kingdom by praying, but the kingdom does belong to those who pray. Prayer is not the cause of fellowship with God, but those who pray are those who see God.

The self pray-ers are tragic figures, then. Jesus says that they already ‘have their reward’ (6:5). They trade the eternal kingdom for passing popularity. In prayer, they should see God, but they see only themselves.

We should remember this the next time we use prayer for our own ends. Also, even when we rightly bring our burdens to God, remember that prayer is not primarily about this passing world and its problems. It is fundamentally an expression of yearning for the True Life of the eternal age. It is a deep longing, which one day will be met in utter and overwhelming Fullness.

We should also remember this the next time we launch into the Lord’s Prayer in some mechanical fashion. Through the Prayer, we should see God, and should be expressing our longing for Him.

In the lead-up to the Lord’s Prayer, Jesus warns against praying like pagan Gentiles (Matt. 6:7). We must not pick up the bad practices of the ‘heathen’.

The heathen believe that human action impresses the gods. Thus, they turn prayer into salvation by works. Their praying consists of ‘vain/stuttering/mumbling words’ and ‘many words’. These are the great sighs, babbling and dramas of human attempts to manipulate the deities.

However, it is not the effort or affectation of prayer that accomplishes anything. The power does not reside with the pray-er. It resides with the sovereign will of the pray-ee.

Prayer is effective, then, only in the context of a relationship with the Father in heaven (6:8; cf. Lk. 11:11-13). Also, prayer must be the submission, not the assertion, of the self.

The Lord’s Prayer is designed to show the right way. It is simple rather than showy, and it points us above: ‘Father’, ‘You be hallowed’, ‘Your will’.

Luke disconnects the Prayer from the Sermon on the Mount. The Sermon does appear in Luke 6:12ff, but the Prayer and other parts of the Sermon appear in 11:1ff (see Calvin). Luke has not got the history mixed up. He makes no claim that 11:1ff happened after 6:12ff. All Luke 11:1 says is, ‘Now it came to pass’.

Luke sees the Prayer in a different light, then. He does not connect it to the Law, Moses and the mountain (the mountain is back in 6:12). He connects it with this: ‘Jesus was praying’ (11:1,

echoing Lk. 6:12?). This gives quite a different perspective!

Firstly, the Prayer is about emulating Jesus. The disciples see that ‘Jesus was praying’, and so one asks, ‘Teach us to pray’. We take the Prayer up, because we want to pray like Jesus. And we want the same intimacy with our Father.

Secondly, the Prayer is about corporate identity. The disciple says, ‘Teach us to pray, as John also taught his disciples’. In effect, ‘Give us our own special prayer’. We pray the Prayer because it marks us out as being Jesus’ disciples. The prayer is not an optional extra for the Church today, then.

Luke presents yet another dimension of the Prayer. It is the sinner’s prayer. Consider the following three points. Firstly, immediately after the Prayer, Luke relates the parable of the persistent friend (Lk. 11:5-10; cf. Matt. 7:7, part of the Sermon). Ask, seek and knock, continually. This is not only about prayer in general, though. In Luke, to ‘ask, seek, and knock’ is about seeking salvation (Lk. 12:36; 13:24-5; 15:8; 17:33). Prayer is about finding the Saviour.

Secondly, the next text is Jesus’ teaching about fathers not giving stones to their children (Lk. 11:11-13). Matthew says the Father gives ‘good things’ to those who ask (Matt. 7:9, part of the Sermon). However, Luke says the Father gives ‘the Holy Spirit’ (Lk. 11:13). The change is telling. For Luke, the Spirit is given upon conversion (Acts 2:38). To pray for the Spirit is for the sinner-disciple to appeal for salvation. Prayer is about finding the Saviour.

Thirdly, the Prayer itself has a telling change. Matthew has, ‘Forgive us our debts’. Luke uses one of his key words: ‘Forgive us our sins’. It is the sinner’s prayer. It is as Luke 18:13 – ‘God, propitiate me, the sinner’ (cf. 5:20; 7:47; 24:47). The Lord’s Prayer is about finding the Saviour. It is to be used by God’s people at all stages of their Christian lives, and even at conversion.