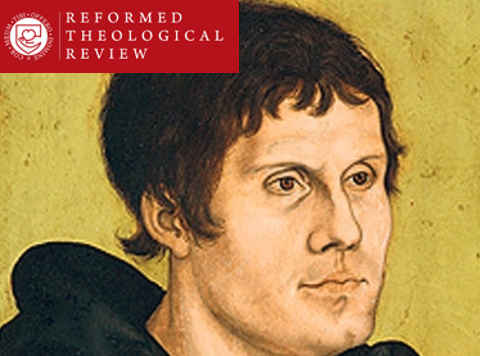 Published: Reformed Theological Review Supplement 5, August 2017, 32–71.
If quoting this essay, please do not quote this website, but quote from RTR, with the appropriate page numbers. Only the introduction is included here – for the full essay, please purchase the Supplement from rtr.org.au.

Ezekiel envisions a chariot with wheels within wheels, omnidirectional but always moving forward. Thus appears Luther’s thought, pre-eminently with regard to the chief article of religion, the doctrine of justification. The traditional understanding says that Luther moved in only one direction: a forensic view, in which the victory of the incarnate Christ is credited to the believer. However, other directions in Luther’s thought have been discerned, and a recent school of thought moves beyond even ascribing an effective, realist or infused justification to Luther. This is the Finnish school—the new perspective on Luther—that speaks of theotic justification (terms are explained below). The believer in some sense becomes Christ.

Which was Luther’s model of justification?[1] Should the Finnish School be accepted?[2] The earlier 20th century Luther Renaissance argued for infusion.[3] Some staunchly defend the forensic view, while positing a transition period, in which Luther was open to infused righteousness.[4] The contention here is that it is not a matter of choosing between the models, of glibly saying ‘all of the above’, nor of saying that he moved between models. There are wheels within wheels, because Luther did not think in terms of a systematised model of justification, but in terms of key points, insights or tenets that had to be affirmed. Adhering to these principles or paradigms rather than to a justification model(s) gives the appearance and to a certain extent enabled Luther to move in multiple directions, but there is consistency, since the underlying paradigms stood firm. [5]

First in this essay, the case will be stated regarding Luther’s view of justification, without making substantial appeal to the historical data. This allows those who are already familiar with the debate to determine quickly how the data are being arranged, and for those less familiar to become quickly appraised of the debate parameters. Secondly, the data will then be laid out by looking at pivotal documents in historical order. This approach seeks to overcome the tendency of proof texting and of overemphasising data from early or later Luther.

[2] The Finnish Luther school has earlier 20th century origins, but commenced with the 1979 work of Tuomo Mannermaa, In ipsa fide Christus adest (Christ Present in Faith), translated into English as Tuomo Mannermaa, Christ Present in Faith: Luther’s View of Justification (Minneapolis: Fortress, 2005). Mannermaa based his thesis especially on early Luther. See also Veli-Matti KÃ¤rkkÃ¤inen, One with God: Salvation as Deification and Justification (Collegeville: Liturgical Press, 2004); Olli-Pekka Vainio, Justification and Participation in Christ: The Development of the Lutheran Doctrine of Justification from Luther to the Formula of Concord (1580), Studies in Medieval and Reformation Traditions (Leiden: Brill, 2008). The Finnish School exists in the context of Lutheran-Catholic ecumenical discussion, so it is not surprising that Thomas Sheridan finds that Luther and John Henry Newman had a similar doctrine of justification (Christ’s indwelling), notwithstanding that Newman violently rejected what he thought was Luther’s doctrine. Thomas L. Sheridan, ‘Newman and Luther on Justification’, Journal of Ecumenical Studies, Vol. 38, No. 2–3 (2001), 217–245. See also Jordan Cooper, Christification: A Lutheran Approach to Theosis (Eugene: Wipf & Stock, 2014); Saarinen, ‘Justification by Faith’, 254–263; Carl E. Braaten and Robert W. Jenson, Union with Christ: The New Finnish Interpretation of Luther (Grand Rapids: Eerdmans, 1998).

[5] Luther’s testimony is accepted that he had a watershed moment on justification, and the date is correlated with the 1515 Romans commentary, although this cannot be debated here. Charles Lee Irons, The Righteousness of God: A Lexical Examination of the Covenant-Faithfulness Interpretation, Wissenschaftliche Untersuchungen Zum Neuen Testament (TÃ¼bingen: Mohr Siebeck, 2015), 21, thinks the date is too early, arguing that 1515 is not reformational Luther since the doctrine of justification is infusional. This assumes that imputation was Luther’s reformational doctrine, which is the point in dispute (this logical problem was raised by Heiko Augustinus Oberman, ‘‘Iustitia Christi’ and ‘Iustitia Dei’: Luther and the Scholastic Doctrines of Justification’, HTR, Vol. 59, No. 1 (1966), 7). Cf. Carl R. Trueman, ‘Is the Finnish Line a New Beginning? A Critical Assessment of the Reading of Luther Offered by the Helsinki Circle’, WTJ, Vol. 65, No. 2 (2003), 236. Timothy George, ‘Martin Luther’, Reading Romans through the Centuries, eds Jeffrey P. Greenman and Timothy Larsen (Grand Rapids: Brazos, 2005), 112–113, has an earlier, Augustinian shift, followed by a reformational shift evident in the 1518–1519 Psalms commentary. However, the 1515 lectures do have imputation and so best accord with the 1545 biographical comment (see below), and are consistent with 1535 Luther, unlike the 1513 Psalms lectures, which are nominalist. Speaking of a conversion experience, or the fundamental step away from nominalism, may be the ‘romantic’ view criticised by Heiko A. Oberman, The Two Reformations: The Journey from the Last Days to the New World (New Haven: Yale University Press, 2003), 47–48, but whilst not denying ongoing development, people can have Damascus Road experiences.