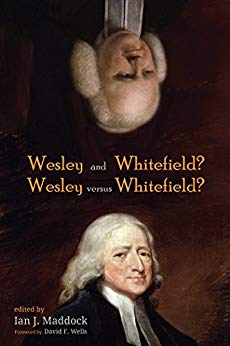 A chapter published in the book, Wesley and Whitefield? Wesley versus Whitefield?, edited by Ian Maddock from SMBC:

Most of the introduction is below. Most of the whole chapter is on Google Books (click here).

That John Wesley adhered to federal, covenant theology, or something akin to it, is beginning to be appreciated by scholars, whereas the federalism of George Whitefield is assumed, not often explored and sometimes taken to contradict his evangelistic fervor. This study compares and contrasts the covenantal theologies of these two superlative eighteenth-century evangelists. To state the case at the outset, Wesley and Whitefield were brothers in arms, federalist friends, despite their infamous Reformed-Arminian rivalry. It was not only evangelism that bound them together, nor just a basic Protestant orthodoxy, but there was an even deeper intellectual or hermeneutical synergy.

There is an inevitable emphasis on Wesley over Whitefield in this study, since Whitefield’s theology is more easily quantifiable,[1] whereas Wesley was the more deliberately-creative theologian. Furthermore, there is the incongruity of an Arminian theologian adhering to what appears to be Reformed federalism. Recent scholarship has Wesley incorporating federalism (either Reformed, or an Arminianized iteration) seamlessly and consciously into an Arminian system, but this needs further exploration. The suggestion rather is that Wesley adopted a covenantal structure comparable with that of Whitefield, yet was unaware of the implications, and was unaware of the extent to which it was Reformed covenantalism. Comparisons between Wesley and Arminius will indicate that Wesley’s covenantal thought was less connected with Arminian covenantalism.[2]

Wesley had a Reformed-Arminian rivalry with Whitefield, but the proposal is that the rivalry also existed in himself. This produced points of tension that surface in his well-known distinctives on justification, universal atonement, the servant-son metaphor,[3] perfection and assurance, although these points cannot be explored in detail here. The question will be whether the substructure or superstructure of his theology won out. The impact of the substructure is seen as he gradually moved to moderate some of his more controversial teachings. His covenant theology[4] does not appear to have modified his core doctrine of the universal atonement, even though the two are often regarded as incompatible, but it can explain his movement on justification and some of the complexity in his notion of servanthood, and it could also alleviate a typical Reformed criticism that Wesley placed too much emphasis on the individual over against divine sovereignty.

1.2 The difficulty of the Wesleyan question

Determining the nature of Wesley’s covenantalism is complex. Firstly, Wesley’s comments on the topic were brief. Brevity is not a telling observation. Whitefield’s comments were also sparse, but federalism was pervasive for him. Secondly, federalist and Arminian covenantal theology can be misunderstood. Federalism has a deep commitment to pact and conditionality (over against the stereotype of covenantal unconditionality), so at the level of covenantal theology alone, Arminian and Reformed coventantalism look similar.[5] The mere presence of conditionality is not determinative.

Thirdly, there are more options than are sometimes considered. Vickers sees in Wesley an Arminian covenantal theology.[6] Rodes sees a Reformed system consciously adapted to Arminian ends.[7] Could he have held to a variant Reformed scheme such as Amyraldianism?[8] These initially appear to be markedly different conclusions, although on closer inspection, each posits substantial Reformed covenantal influence in Wesley’s thought. They also portray Wesley as consistent and self-aware.[9] To what degree was he conscious of the real nature of his position, though?

[3] Rodes, From Faith to Faith, 12, takes the servant-son metaphor as the chief evidence of the influence of covenant theology upon Wesley. The difficulty is that Wesley’s servant idea crosses the Old and New Testament divide, and so is not a reflection of Wesley’s view of the nature of the old covenant.

[5] The broad similarities between Arminian and Reformed theology leads Reist, “Theologies of Grace,” 26–40, to argue that Wesley and Whitefield were not as divided as they thought they were. All he really shows is that one was Arminian and one was Reformed.

[7] Rodes, From Faith to Faith, 8, pointing out that Outler and Noble both acknowledge a connection between Wesley and covenant theology, but leave it unexplored. Rodes provides several reasons why so many have failed to see the relationship.

[8] Adamthwaite, Through the Christian Year, 236, has briefly suggested it of Charles Wesley, on the basis of the inclusion of a treatise by Daniel Brevint in the 1746 collection of Communion hymns. “ . . . it is quite possible that Wesley had read more widely in the Saumur theology . . . I cannot prove this.” The brothers betray no concern with the order of decrees—see below.

[9] Ironically, while some claim Wesley to the federalist camp, others believe that Whitefield was compromised by Arminianism in his free offer of the Gospel. Of the free offer, Packer says in Predestination in Christian History, “Well, Calvinists do that too!” Packer, Honouring the People of God, 215. Packer called Wesley a “confused Calvinist,” whereas Jerry Walls sees Wesley as coherent and the Reformed as confused: Walls and Dongell, Why I Am Not a Calvinist, 154; Walls, “John Wesley on Predestination and Election,” 619.