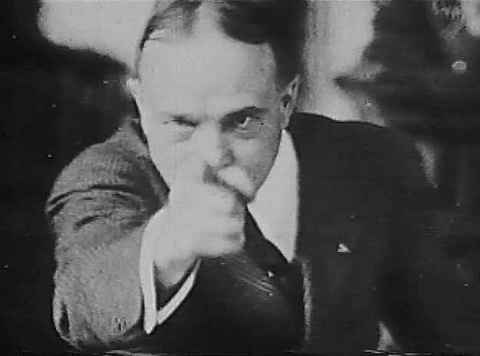 John Chapman rightly says, ‘Evangelistic sermons are, generally speaking, like any other sermon’[1]). Still, here are 10 tips for preaching evangelistically in particular.

However, if the tank is the better weapon, then the expository sermon is the tank. Expository preaching makes a powerful point just by presenting itself as from Scripture. ‘There is an air of integrity”¦when we strive to show from where our gospel comes.’[2]

The underlying battle for the non-Christian is one of authority. Will he or she heed the voice of God? The expository sermon most clearly takes its stand on biblical authority, and challenges the non-Christian to do the same. By the end of the sermon, the unbeliever will have to make a decision: ‘I can see it is from Scripture, but do I believe it?’ His sheep will know His voice.

Keep it short—but this can depend upon the attention span of the audience and the homiletical skill of the preacher.

Shortness can also apply to the choice of Scriptural text. An expository sermon on a long text can be complex and hard to follow. The saints may well have their Bibles opened in front of them as you preach; the unbeliever is less likely to do so, and having it printed out or up on the projector screen might still not be too exciting for the average unbeliever. A preached one-verse text can leave a powerful and memorable impression (as preachers across the 17th–19th centuries could testify). It can be preached without having to explain intricate details about the chapter that have little to do with the evangelistic concern.

But, you say, what about the danger of not paying due attention to the context of a verse? This is a hermeneutical issue that the preacher pursues in his study, but does he have to present his argumentation in the sermon too? Do we have to reveal how the meat was minced? Is it a pressing issue for the unbeliever to know about the succession of Persian kings?

This advice does not come without some level of biblical support. When the apostles come to draw on OT texts in their sermons in Acts, they do not engage in exegesis and exposition of whole chapters and whole Psalms. They draw out points from particular verses.

First, there is widespread agreement that jargon should be avoided when trying to reach the uninitiated. The difficulty is what simplicity looks like in the context of a Lord’s Day service, in which one also seeks to build up the people of God, and need more than milk. The Scriptures themselves are simple enough for anyone to understand, and yet say many difficult things at the same time.

Secondly, there is something worse than using jargon—the use of interminably long and complex words and sentences. Jargon can be explained, but there is no saving a long sentence. It is hard to follow a preacher when words have many syllables, when sentences are long, when conjunctions and subordinating clauses start piling up, when passives are used, and so on. Keep it at a low grade reading level.

Thirdly, do not explain the obvious. Simplicity can be about not explaining the obvious, but rather connecting the topic with what is already known (such as Paul connecting with the Athenians in Acts 17).

Keep it self-evidently Scriptural. The evangelistic sermon is not the time for subtle exegesis, or fantastically typologised Old Testament texts. If the text needs to come with copious explanation, it might not be the best text to be used. Even the unbeliever should be able to see easily that the call that you are making to them arises straight out of the text from which you are preaching.

Christ and Him crucified is the message. Avoid divisive comments, whether about politics, local customs, sport, or the weather. The same is true of all preaching. Hence, at Christmas time, yes, baby Jesus went down to Egypt. No, you do not need to comment about asylum seekers. Why did Jared say that? What are Jared’s views on the subject? Is he trying to make a political point? Is he saying that’s not an important issue? Is there something that he said that I should get outraged about? Can I put this on Twitter?

Keep it illustrated, without failing to keep it focussed. The topic is Christ, not whatever your audience would more naturally like to think about. Illustrations must always serve the end of, well, illustrating.

The sermon should speak into the lives of your listeners—not by mentioning the things that they naturally like, but by addressing the big questions they might not want to talk about quite so openly: the existence of God, guilt, death, judgement, life’s highest purpose, hope, joy, and eternal life. Notwithstanding what your listeners were thinking and feeling before you started preaching, the sermon aims to bring conviction of sin and faith in Christ.

I do not merely mean, use gender-neutral expressions. I do mean that your message needs to be accessible by a cross-section of the community. Unless you are genuinely preaching to a room of University philosophy students, a glittering critique of the post-truth world is not where it is at. In a typical congregational setting, it would be quite wrong to repeatedly set your focus on calling only one favoured group to salvation, to the exclusion of the rich, the poor, the educated, the uneducated, the old, the young, the Australian-born, the overseas-born, etc. This might be one of those things that is easier said than done—the individual preacher relates easier to some groups than to others—but the intention has to be there.

Choose a text that readily conveys a sense of passion, whether of horror at sin and judgement, delight in the grace of God, etc. Then, preach it as such. The passion of ‘Come, everyone who thirsts’ (Isa 55:1) cannot be missed. Etc.No more passionless preaching—whether evangelistic or not!

In all that, keep your motives and concern about God first, the non-Christian second, the health of your Church third, and your own success a non-starter. Evangelism is not about growing a Church that makes you look good as a pastor. It is about glorifying the God of grace and justice, and the eternal and temporal happiness of those to whom you are speaking. In the secular world, they speak of ‘authenticity’ in leadership. There needs to be authenticity in evangelism, too.

[2] Galea, ‘How to Prepare an Evangelistic Talk: The Gospel, the People and the Packaging’, 164.