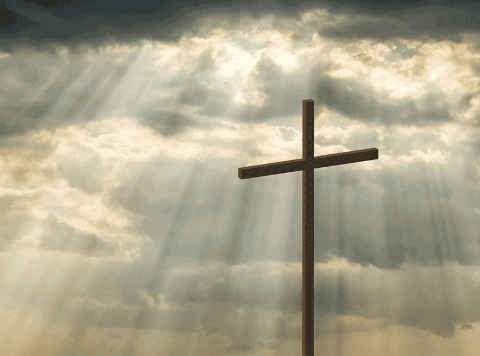 Christ took the penalty for our sin upon Himself. Our penalty was eternal separation from God. Therefore, the Son must have suffered separation from God—mustn’t He? What would that mean? Is this the severing of the Triune union between the Father and Son? Is this relational, being ‘cut off from”¦sweet fellowship with his heavenly Father’, such that Christ was ‘abandoned by his heavenly Father’ (Grudem, Systematic Theology, 574)? What does Townend mean, saying there was ‘searing loss’ when ‘The Father turns His face away’? The Father’s anger was upon the Son, who had become sin for us, so the Father had no choice but to reject and banish the Son from His presence.

The sentiment is well-meant, but here are 10 reasons why I don’t believe the rejection idea.

The Cross was Jesus’ ultimate act of obedience: obedience—even to the point of the Cross (Phil 2:8). If ever the Father could say, ‘This is my beloved Son, in whom I am well pleased’, it was at the Cross. The OT sacrifices were a ‘sweet smelling aroma’; how much more was Christ’s sacrifice a delight to God? ‘Christ also has loved us and given Himself for us, an offering and a sacrifice to God for a sweet-smelling aroma’ (Eph 5:2).

Jesus was ‘delivered by the determined purpose and foreknowledge of God’ (Acts 2:23). ‘It was the will of the Lord to crush Him’ (Isa 53:9, ESV). And the Lord takes pleasure in His will. In fact, the word for ‘will’ in Isaiah 53 is chaphets, pleasure, delight. ‘Yet it pleased the Lord to bruise Him’ (NKJV). Which takes us back to point one.

Father, Son and Spirit each fully and together possess the divine being or substance. They cannot turn on each other. The problem here is that some misunderstand the Trinity. The Trinity is three guys who get along really well with each other. But they’re independent enough to turn on each other, as well. This social model has made deep inroads in evangelicalism’s Trinitarian thinking, but it’s not the Bible’s God. That’s playing with tritheism.

Of course, the perfect Son was repulsed to be treated as a criminal—it was a heavy burden to bear—but this is another matter. And the divine wrath of God against sinners was expended upon the Son. He drank the cup. The wrath of God was satisfied.

The rejection theory means to capture this, but it says too much, as it were, and divides the godhead. Moltmann wanted a God who felt pain, but it only humanises Him, leaving us in desperate straights.

Jesus wasn’t just ‘made sin’ at the Cross, but all through His earthly life. The intensity of suffering at the Cross was horrendous, but He was ‘born under the [curse of the] law’ (Gal 4:4). Did the Father ‘turn His face away’ from Jesus through all His earthly life?

Psalm 22:1 is a key verse for the rejection theory. ‘My God, my God, why have you forsaken Me?’ (Ps 22:1). What does it mean? Two things. First, context is clear. It’s poetry, not a Pauline Epistle, so we need to look at the parallel line.

‘Why are you so far from helping me?’, is the parallel line. This is the issue: ‘no help’. The sufferer is asking why God doesn’t save him from his oppressors. I.e. ‘Why do you let my oppressors torment me?’ God gives the sufferer over to suffering. Psalm 22:1 is the equivalent of Isaiah’s statement, ‘It pleased the Lord to bruise Him’. In fact, the Psalm later says it: ‘You have brought me to the dust of death’ (v. 15).

Secondly, it’s a rhetorical question. The sufferer knows full well why God does this. What’s the point of asking it, then? To express his distress. This is real suffering. He really doesn’t want to go through it. He would rather God saved Him instantly out of it. ‘If it is possible, let this cup pass from me. But not my will”¦’ (Matt 26:39). It’s not desertion by God; it’s a battle within the sufferer.

Calvin has it as the ‘feeling…of being deserted’. He first has it as of David, who responded with perplexity to the withdrawal of ‘tokens of favor’, the appearance that the Father had ‘drawn back his hand’. Calvin’s overall emphasis is that Christ did not sin by being unbelieving, and God always sustains His people. Perhaps it could be put thus: ‘It’s really hard in my present circumstances to feel your closeness’. This is a very real human reaction, as the extent of physical and emotional pain clouds over our spiritual senses. See Lucas Sharley, ‘Calvin and Turretin’s views of the Trinity in the dereliction’, RTR 75, no. 1, 2016.

Jesus uses the Psalm for the following reasons.

i. To state that God has given Him over to death. He cites the Psalm at the ninth hour, just before He dies.
ii. To pray for help. This is how the crowd understood it. And He is helped, for after praying it, He dies. It was a mercifully short crucifixion—one of the many tokens of grace Jesus received during the ordeal.
iii. To express His faith. ‘My God!’ In fact, He ‘cried with a loud voice’. The ‘loud voice’ in the Gospels is used for confident, bold affirmations. This was not a pathetic, miserable, defeated whimper.Â
iv. To assert that the prophecy of the whole Psalm had been fulfilled and His mission was accomplished. Matthew and Mark record the Ps 22:1 quote, made just before the offering of sour wine—and both omit the ‘It is finished’ statement. John (19:30) records the ‘It is finished’ statement, just after the offering of sour wine—but omits Ps 22:1. The statements function in the same way.

Reading the whole of Psalm 22, it strongly affirms that God sustained the sufferer. The very opening words affirm an unbroken relationship: ‘My’ God.Â  I’m particularly drawn to the participles of v. 9. ‘You are the one bringing me up, from the time of my birth, and you are the one making me trust from the time I was breastfeed onwards’. The verbs are not just about the time of being born. These are ongoing realities. See also Isa 50:7, of Jesus at crucifixion, ‘The Lord God helps me’. And Heb 9:14, He ‘through the eternal Spirit offered Himself’.

The Psalm heads to the great turning point in v. 21: ‘You have answered Me’. No hint of relational abandonment in that. Put v. 24 in large letters: ‘He has not hidden His face from Him’.Â Write them in large letters on your own mind and heart. God never deserts His people – not even Jesus on the Cross.

Jesus became sin for us, but He was still the perfect Son of God. ‘Truly, this was a righteous man’ (Luke 23:47. Pilate confessed it too, Matt 27:23). The implications of this need to be honoured. To personalise this, if you were a judge, and your own innocent son valiantly stepped forward at a trial to take a criminal’s punishment upon himself, would you reject him? The sentence is still carried out, but love is not withdrawn. God’s anger was upon His Son, but He was not angry with His Son.

The ‘rejection by God’ theory looks like the answer. However, division within the Triune God is not the same as our everlasting spiritual death. The Cross simply wasn’t everlasting; it was only a few hours.

There is inestimable value in the death of God’s Son. It was God’s Son who died. The value is in the Person: God’s righteous, precious Son. And the nature of His death: a freely given sacrifice, with perfect love for us and obedience to God. That’s what makes it ‘sweet smelling’ (Eph 5:2).

We’re so used to people dying, that we miss the uniqueness of Christ’s death. It was the purest life that was willingly offered. There didn’t need to be desertion for God to be able to say, ‘That is enough; I am satisfied; my justice is fully answered.’

Further on the nature of His death: ‘It was not enough for him to suffer any kind of death’ (Calvin). Calvin doesn’t there point to the extent of physical suffering. Rather, it had to be ‘before the judgment seat as a criminal’, a judicial sentence, so that it was clear that He was dying as a criminal in our place.

Again, we perhaps get used to miscarriages of justice, but we know that even just being wrongly accused can be devastating. We probably will never really understand the horror of the sentence for the Holy one, as He bears our reproach and shame (Isa 50:6; Heb 12:2). He experienced terrible torments in His soul, since He had to ‘grapple hand to hand with the armies of hell and the dread of everlasting death’ (Calvin again). This was an ‘invisible and incomprehensible judgment’. This was Christ’s ‘descent into hell’.

Whilst on Calvin, one infers a lesson not to overplay the extent of Christ’s suffering. The tendency is to turn Christ into a hapless victim. But in a brilliant statement, Calvin writes, ‘Yet we must not understand that he fell under a curse that overwhelmed him; rather—in taking the curse upon himself—he crushed, broke, and scattered its whole force.’ Our hell is eternal despair, but Jesus never despaired. This is the Lord, mighty in battle (Ps 24)!

It was the Son of God who suffered and died. How could we forget this, that we would need to seek the value of the Cross in speculation? That’s enough ‘value’ to pay the sins of all God’s elect people; and for the sins of the whole world, and a thousand worlds besides, many would add. When I remember who it was who died on the Cross—not just the method of execution, and not some theory of Trinitarian disruption—that’s when I fall silent. It was the incarnate Son of God.

There is no clear statement in Scripture that the Father turned His face away. It is only an inference from statements such as Hab 1:13, ‘You are of purer eyes than to behold evil’. If the Father-Son relationship was separated at the Cross, that would be huge. It would be the core meaning of the Cross. You would expect it to be everywhere in Scripture, with undeniable clarity. But it’s not. Wrath and justice, yes. Desertion, no.

Does ‘The Father turn His face away’? ‘The Father gives His Son to die’, yes. ‘He prays, “Please take this cup from me”,’ yes. ‘He bears the full weight of my sin’, yes. But ‘He has not hidden His face from Him’ (Ps 22:24). Townend’s song is beautiful, and the metaphor admits to other meanings. I can sing it with a bit of double think: ‘The Father appears to turn His face away, by giving His Son over to execution, but actually sustains Him through His suffering’. As Jesus bore the full weight of sin, He was sustained by His God; and the Father was never more pleased with the Son.

If the Father didn’t desert the Son on the Cross, what was the nature of His suffering. See ‘10 reasons Jesus suffered so greatly on the Cross’.

iThere are no comments