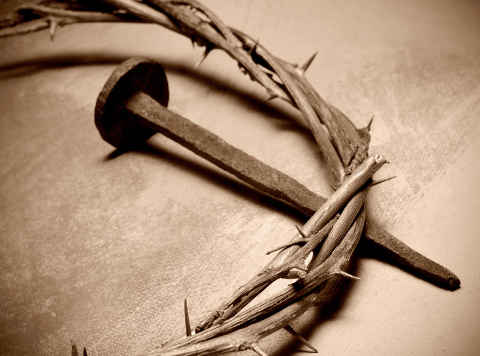 10 reasons Jesus suffered so greatly on the Cross: His victory before the resurrection

At the Cross, Jesus engaged in battle. He acted as the man of war, the warrior. What constituted the battle for Him? How did Jesus suffer? Here are 10 reasons Jesus suffered so greatly on the Cross. The first four are suffering in the more expected sense of what was done to Him by the world and the Devil. The next four are struggles that arose because of who He is and what He was trying to accomplish. Finally come two fundamental, underlying realities without which nothing else is explicable.

Jesus didn’t suffer physically more than others. Crucifixions typically took days of torturous agony. The Father spared His Son from that. At the ninth hour, Jesus prayed for help (citing Ps 22:1), and at the ninth hour, the prayer was answered.

Still, ‘the terrors of death have fallen upon me’ (Ps 55:4). His pain was as unbearable as pain could be—the type of pain that typically slides into unconsciousness and death. In crucifixion, unconsciousness was relief. It brought cessation of suffering, but also cessation of struggling, which hastened death. The Romans countered by allowing sour wine—short-term kindness; long term cruelty. Jesus rejected the analgesic, intensifying His suffering, but shortening His life.

Scripture consistently connects the Cross to shame. Shame is what you feel when rejected by the community—the awareness of transgressing community standards and of being small in the eyes of others. With it comes isolation and other consequences.

The community opinion was unambiguous. The Sanhedrin and the Roman State condemned Him. The Sanhedrin represented the people of God, and its rejection meant Jesus had no spiritual home. Rome represented civilisation and justice. It treated Jesus as the greatest of fiends—a troublemaker, a disturber of the Pax Romana—and left him with no home anywhere in the world.

The ostracization ‘went viral’. Soldiers insulted Him. His own disciples cowered before the community’s opinion. He was unprotected, ridiculed, alone.

Yet Jesus knew He was in the right. I know what communal rejection would mean to me. Self-doubt: how could I be right, when the world tells me I am wrong? Fear: what consequences will I experience? Anger: at the injustice of it.

I do not say that Jesus doubted Himself, but the burden must have been enormous. I cannot say how the sentence buffeted against the One who was the righteous Son – such a contradiction of who He was in Himself.

Jesus was victorious, though, not just afterwards, but throughout. He turned His face towards ‘shame and spitting’, setting ‘His face like a flint. ‘And I know that I will not be ashamed. He is near who justifies Me’ (Isa 50:7). He was not intimidated, but He ‘despised’ the shame (Heb 12:2). He thought little of it! He put it in its place.

Jesus fought against Satan, even though submitting to Satan’s ‘hour of darkness’ (Luke 22:53). Why did Satan persist in bringing Jesus to death, for surely he knew the prophecies? At first, he tried to stop Him. ‘Get behind Me, Satan’, Jesus said to Peter. Then Satan switched tactics. This was the plan: to send Jesus to death (‘Satan entered Judas’), but to have Him succumb to fear, doubt, anger and bitterness.

From Satan’s perspective, the odds were good. No one in human history had come through sustained attack without being spiritually scathed. Adam and Eve gave in with barely a fight.

Jesus fought temptation in the Garden with prayer. ‘ “Watch and pray, lest you enter into temptation. The spirit is willing, but the flesh is weak”. Again He went away and prayed’ (Mark 14:37). This is at the very heart of Jesus’ battle.

The Father did not desert the Son. He sustained Him with faith, and many ‘tokens of blessing’ throughout (Pilate’s affirmation, Simon of Cyrene, His mother’s presence, the darkness demonstrating the hour was divine, the thief’s conversion, prophecies being fulfilled, a quick death”¦). But the Son had to battle to maintain His sight of the Father.

Jesus had known the full heights of communion with God. That sustained Him in the wilderness. It meant He could sleep through the storm! But at the Cross, a very human, physiological reality comes into play. As His body reacts to pain, as electrical signals light up His brain, as chemicals race around His body, there is reduced mental space for awareness of the presence of God. The temptation is to let the pain rule.

Faith remained, and union remained, but now there is a clamorous, violent grasping upon His God. Three times, He prays in the Garden. There is the ‘cry of dereliction’, but this was no mere whimper. He cried out with a ‘loud voice’, with an iron determination to take hold of His God again. ‘My God’!

What a sufferer, but what a Victor! And what a model for us when our minds cloud over and pain overwhelms. We need to shout it aloud, and place it at the very front of our minds: ‘My God’!

Jesus had trained for this, in His temptation in the desert. What is fasting? It is partly training for the soul, not merely to master the body, but to remain in union with God in the evil hour.

Jesus battled because He loved. Jesus wept when others wept (John 11:35), so He sensed the impending loss His disciples would experience. He knew this: ‘Strike the Shepherd, and the sheep will be scattered (Matt 26:31; Zech 13:7). He knew Peter would be sifted. He knew the tears of His mother and the daughters of Jerusalem. He knew He would not be there to comfort His distraught disciples.

Jesus battled to love. He gives, even when one would have thought He had little left to give. He prays for His disciples. He reaches out to Peter. He cares for His mother. He even reaches out to the dying thief.

Jesus offered up His life. He had power to lay it down, and power to take it up again. Nothing happened at the Cross to which Jesus did not acquiesce. Others have sacrificed themselves; none has had such control over every movement and moment. Jesus stepped forward to be betrayed. He held Himself there to the Cross. This, despite full awareness He could call the angels to deliver Him (Matt 26:53).

‘Strike the Shepherd, and the sheep will be scattered’ (Zech 13:7), and Zechariah says that ‘two thirds will be cut off’. Jesus knows His death will ‘justify many’, but He also knows it will bring judgement to many more. It will bring judgement to Jerusalem—not a stone will be left in place. It will turn the world-upside down, setting family member against family member. He dispenses justice even during the event, with His words to the High Priest, and His deafening silence to the other thief. On the final day, many will be condemned for rejecting the Gospel (2 Thess 1:8). And it brings Jesus to tears (Luke 19:41).

The Cross was the central act of history. The fate of millions weighed on His shoulders. These were the things that angels enquired into, that the prophets foretold, that was at the heart of the divine plan for the world. It was a cosmic event, an apocalyptic event, precipitating the coming of the Son of Man on the clouds of heaven. A whole new creation depended upon the outcome.

I do not mean that He feared to take the work up, but we speak of the ‘weight of responsibility’ and the ‘burden of office’. If ever those statements meant something, it was at the Cross. The burden drew on every fibre of His being.

The condemnation of the human court was shameful, but there was also the divine sentence. Jesus’ soul was ‘exceedingly sorrowful, even to death’, in view of the ‘cup’ of divine judgement. I don’t know how the ‘guilty’ sentence affected the Holy one, hearing at the divine bar the words, ‘You will be treated as being everything that is repugnant to You. You will become sin.’

I know what it is to be treated as righteous even though I am guilty. The imputation of Christ’s righteousness to me doesn’t make me righteous: the Spirit of God works that within in. It doesn’t make me loved: I was loved from the foundation of the world. But it is the gateway to blessing, opening the way to the personal experience of God’s love. I hang on to imputed righteousness for dear life! I delight in it.

But I cannot imagine being treated as guilty even though being righteous, entirely and only righteous. It did not make Him unrighteous. It did not make Him unloved (not even the ‘children of wrath’ for whom He was dying were unloved). But it was the gateway to the curse. Humanity can try what it may, but only the Father’s sentence opened the floodgates of suffering. He freely agreed to be the second Adam, but how repugnant still was the association with sin? How did the sentence batter His mind, heart and conscience?

Satan’s play was wide open. To Adam, and Jesus in the desert, Satan had said, ‘God withholds good things from you.’ Now he can use the more potent formula: ‘God wants to pour all evil upon You’. What was Jesus’ response? ‘Not My will, but Thine’. He was victorious against the threat! Moreover, He confidently believed that God would justify Him, raising Him from the dead. As Jesus saw it, the Cross was His glory! ‘Father, the hour has now come. Glorify your Son’ (John 17:1).

Jesus suffered physically—and people say, ‘That that is not enough’. He suffered the shame, but still, ‘Not enough to pay for sin’! This forgets who He is. He is the Son of God. We cannot grasp the offence to His person, position and dignity. Matthew says it: ‘all those who passed by blasphemed Him’ (Matt 27:39). The humiliation began at the incarnation: true majesty hidden by decaying flesh. At the Cross, the desecration—the outrage—was complete. By the time His captors finished with Him, He barely appeared to be human, let alone divine (Ps 22:6).

No-one else has suffered like this. He ‘endured most grievous torments immediately in His soul, and most painful sufferings in His body’ (Westminster Confession). Yet He was victorious throughout. He remained faithful, and not with a bare minimum of spiritual life, cut off from the Father. He remained in vital union with His God, with full love, trust and hope.

What assurance this brings to us. Our sins truly are covered. And what a model for us! Union with God can remain at the darkest moments of our lives. I would not use that against anyone who was overwhelmed—I know how quickly my own heart melts into fear. But can I train myself now, in the brighter days of my life, to be better prepared for the evil hour, to follow Jesus on the Cross?

For consideration of whether the Father deserted the Son, see ‘10 reasons the Father didn’t turn His face away at the Cross’.

iThere are no comments